While other 70-year-olds may be planning exotic cruises or luxurious overseas holidays, state government veterinarian Colin McQueen continues to clock in at the Ararat export abattoir as he works to pay off the last of the three homes he bought in Melbourne’s inner northern suburbs for his adult children.

But he is far from bitter.

In fact, he is more than happy to forgo the luxuries usually associated with a well-earned retirement. Instead, he is providing his kids with good homes in suburbs they would otherwise never be able to afford to buy into. In the process he is saving them hundreds of dollars in after-tax income they would have had to pay the banks every week if they had mortgages.

While the extreme generosity of McQueen and his wife Stephanie sets them apart, they are part of a growing pool of Baby Boomer parents who want to help their adult children buy their first property. While many of them bought their homes when suburban real estate was affordable to anyone on a decent wage, this is a luxury no longer available to new generations of homebuyers. 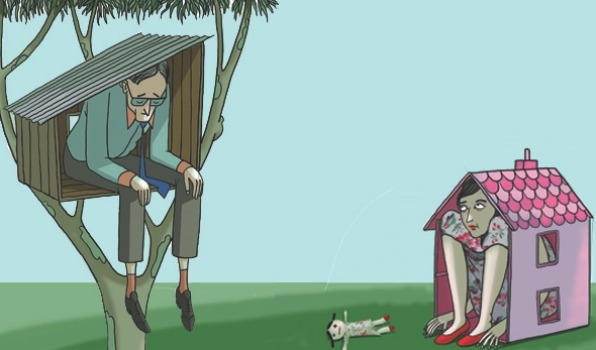 A recent survey by REST Industry Super found that an incredible one in three retirees in Sydney, Melbourne and Perth and one in five in Brisbane and Adelaide were looking to give their adult kids money to help them get onto the property ladder.

“Not only is it difficult for young people to save a deposit for a property, when they buy one they can be paying up to $1000 per week in after-tax income as interest on their mortgage,” McQueen says. “This makes them very vulnerable to a sudden spike in interest rates, which is going to be a likely consequence of our current ponzi-like system of money-creation-as-debt.”

When McQueen was a graduate in his 20s, he could have bought a house in North Fitzroy (a fashionable suburb 4 kilometres from the city centre) for $13,000. Now the median house price in North Fitzroy is $1.4 million, according to CoreLogic RP Data.

Making it even more challenging, salaries have not kept pace with rising house prices: 40 years ago the proportion of median family income required to meet average loan repayments was between 10 and 15 per cent. Now, according to the Real Estate Institute of Australia, that figure is more than 30 per cent. 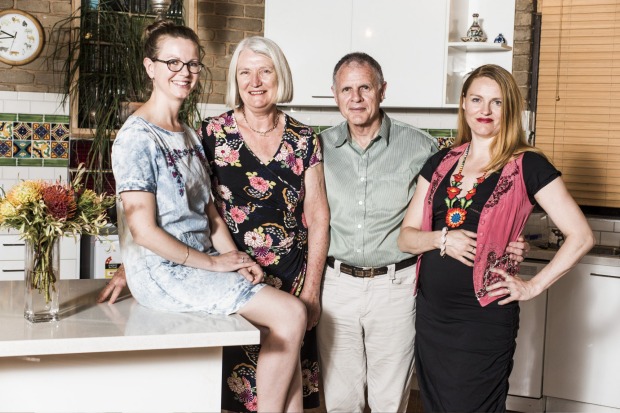 For most families, unaffordable housing means adult children are living with their parents for longer. But as the McQueen’s example shows, that is not the only option. While you may not be able to go to the lengths they have gone to, there are a number of ways you can help your children buy their first home.

Buy it for them

The McQueens have financed their children’s homes through a combination of capital gains, some inheritance money and drawing down from their superannuation. The properties are in Stephanie’s name, and the children are tenants, paying minimum rent. 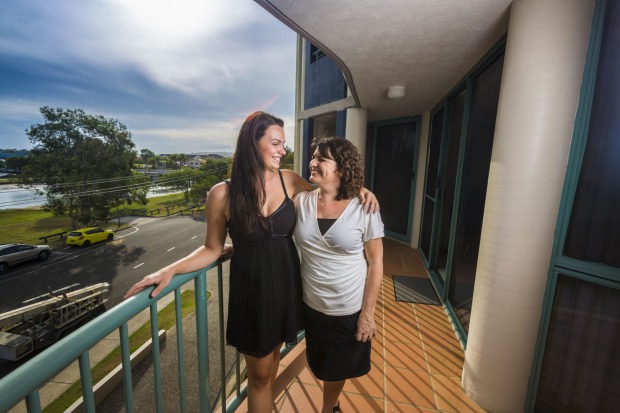 “Our children all pay rent – about half the market rate – which covers our expenses and provides a bit of pocket money,” McQueen says.

“In the fullness of time, they can expect to become an owner of the property. To me, this is a great avenue for building intergenerational wealth and maintaining control over one’s assets if there were to be a breakdown of the children’s relationships or bankruptcy,” he says.

The McQueens are also building an extension at the back of their own Fitzroy home. “We plan to live there when we are elderly rather than go into an old person’s home. Hopefully one of our children’s family will move in.”

McQueen says the arrangement has worked “brilliantly” for them, but there are potential tax and legal implications to consider, meaning the advice of an accountant, financial planner and property lawyer should always be sought.

“You may have to pay tax on the rental income you earn,” says Brisbane property lawyer Paul Brennan. “You may also have trouble getting credit and there could also be complications due to divorce or if one of the parents passes away or gets dementia,” he says.

In addition, as they are investment properties, annual land tax must be paid.

The children will have to pay capital gains tax (CGT) when they eventually sell the properties, although not when they inherit them, explains Adrian Raftery, tax author and senior lecturer in financial planning at Deakin University.

“Given the tremendous growth in house prices, this could be quite substantial,” he says. (They may also qualify for a partial reduction in the proportion of CGT they have to pay.)

Another risk is that a future government could reintroduce death duties, says McQueen. “A financial adviser might recommend buying properties in a trust structure, but of course trusts could be targeted for tax too, though this is perhaps less likely,” he says.

Give them a cash gift

One of the most popular ways to help out, as shown in the REST Industry Super survey, is to gift your children money either from super or from other investments or savings that can go towards a deposit – or, if you are really generous, cover the entire deposit.

The issue with gifting is that the money handed over cannot be easily recovered if parents need it later in life as they grow older.

“I’ve seen it a lot,” says Suzanne Haddan, managing director of Sydney-based BFG Financial Services. “People reach their eighties and need all sorts of medical treatments. Because they have helped the kids so much, things can be very tight.”

Other things to consider, says Haddan, include the potential for a relationship breakdown and the possibility that your child may pass away.

She suggests the adult child and partner enter into a binding legal agreement, which states what happens to assets in the event of a breakdown, and also that they buy the property as “tenants in common” rather than under the more common joint tenancy arrangement.

“Under tenants in common, if you die, your share does not automatically go to your partner as it would under joint tenancy, so you can control who you leave it to,” adds Haddan.

“The bottom line is you should see a solicitor. You should also periodically review your will and super, and structures that hold your assets. People stuff up even after they seek legal advice. They put assets in the wrong name or tax structure.”

This is especially the case if you gift money in retirement or as you transition into retirement.

For parents drawing a government pension, your payout could be affected if you exceed “deprivation” (or gifting) rules, which limit gifts to $10,000 a year and no more than $30,000 over a five-year period.

For those who are retiring early having reached preservation age (55 for those born before July 1, 1960) and accessing their super through a transition to retirement income stream, they can receive up to 10 per cent of their super each financial year and gift all or part of this to their children.

Brisbane property lawyer Paul Brennan believes providing a loan, forgiven on death, is a better option than gifting the deposit, especially when providing a large sum of money that may never be recovered.

“The worry is that the property will be tied up in a divorce situation. Therefore, the loan is a tidy way of doing it – it is easier to refinance and get out before the trouble starts,” he says.

This still needs to be carefully structured because the holder of the first mortgage (usually a bank) may be reluctant to provide financing or may only lend a smaller amount if a second loan or caveat is registered against the property.

Brennan advises that parents provide money through an unregistered loan secured by the property and specify the amount lent, interest and repayment date, which can be rolled over.

“The will of both parents can include a clause forgiving the loan on death, but parents should try to get it back when their children move up in the property world, especially if you have other kids,” adds Brennan.

Act as a guarantor on their mortgage

One of the most popular ways parents can help out is by acting as a guarantor over part of the loan amount, by using the equity in their own home or investment properties.

This can increase their children’s borrowing capacity, remove the need for paying a deposit or having to paying costly lenders’ mortgage insurance (generally required when someone is borrowing more than 80 per cent of the value of the home).

This is just what 19-year-old Sunshine Coast beauty therapist Tayla Prentice turned to after finding that her $30,000 annual salary made it almost impossible to buy even a modest investment property.

Prentice, from Maroochydore, saved up $15,000 for a deposit for a one-bedroom investment unit in Mooloolaba while living at home, but because of her low income could only borrow $240,000.

“My mortgage broker suggested my parents Tracy and Darren were an option,” Prentice says.

With her parents acting as guarantor, she was able to borrow up to $300,000 and did not need a cash deposit, most of which she used to pay stamp duty.

“We were more than happy to do it and get her into the property market,” says her mom Tracy. “Young kids can’t save enough for the deposit they need. By the time they have saved more, prices have gone up.”

Mortgage Choice broker Jonathan Lee says banks will generally do guarantor loans up to 20 per cent of the value of the mortgage with some also covering buying costs like stamp duty.

The risk is, of course, that if the child defaults, the banks can pursue the parents for up to 20 per cent of the loan amount to cover any shortfall when they sell the property. If they can’t cover it, the banks can sell the parent’s home to recover their costs.

For this reason, Lee says, banks generally won’t accept guarantees from parents whose sole asset is the family home: “Parents need other investments just in case something goes wrong. The banks don’t want to put the parents out on the street,” he says.

Speaking from experience in dealing with his clients, Brennan advises parents against being guarantors, especially when it is a big loan amount, because of the risk they may lose their home if their children default.

Also, he says, “parents usually deny that they understood that they would lose their home.”

Teach them to budget and save

Not all help needs to be financial. In some cases, being generous is a bad idea and can be disastrous for the parents.

Haddan says that before parents contemplate how much to give, they need to look at the effect helping their kids will have on their own overall wealth position and financial goals.

“The emergency instruction you hear on an aeroplane – ‘fit your own mask first, before assisting others’ – applies here. You must make sure you don’t create a financial headache for your own circumstances,” Haddan says.

“The default position should not be ‘what money can I give my kids’. It should be teaching them about the obligations of paying off a mortgage, making sure they know how to save and sticking to a budget.

“Money comes with obligations like not doing that trip to London and being able to manage your finances well.”

And, she warns, your generosity can also hurt: “Gifting money to your kids may allow them to buy a home, but it can also put them under great personal strain by masking their true financial circumstances.”