The following text is taken from the MGD Investment Update, June 2020 Edition.

While we in Australia have been (relatively) successful in managing the spread of the COVID-19 pandemic (see figure below), it is becoming clear that we may never revert to what we called “normality,” and the transition to a new normal (whatever that looks like) will be slower than we perhaps imagined. What is almost certain is the longer tight restrictions remain in place, the greater the devastation to the economy, and the higher the probability that governments need to continue their already extensive economic support measures. A “second wave” of the pandemic is the circumstance that governments are trying to avoid in keeping restrictions in place. Second (and subsequent) waves would merely add to the considerable uncertainty which is the central theme of this Investment Market Update.

Versions of the Australian experience are playing out around the world, depending on the interplay between each nation’s ability to “flatten their curve” (see figure below) and to manage the associated economic fallout. 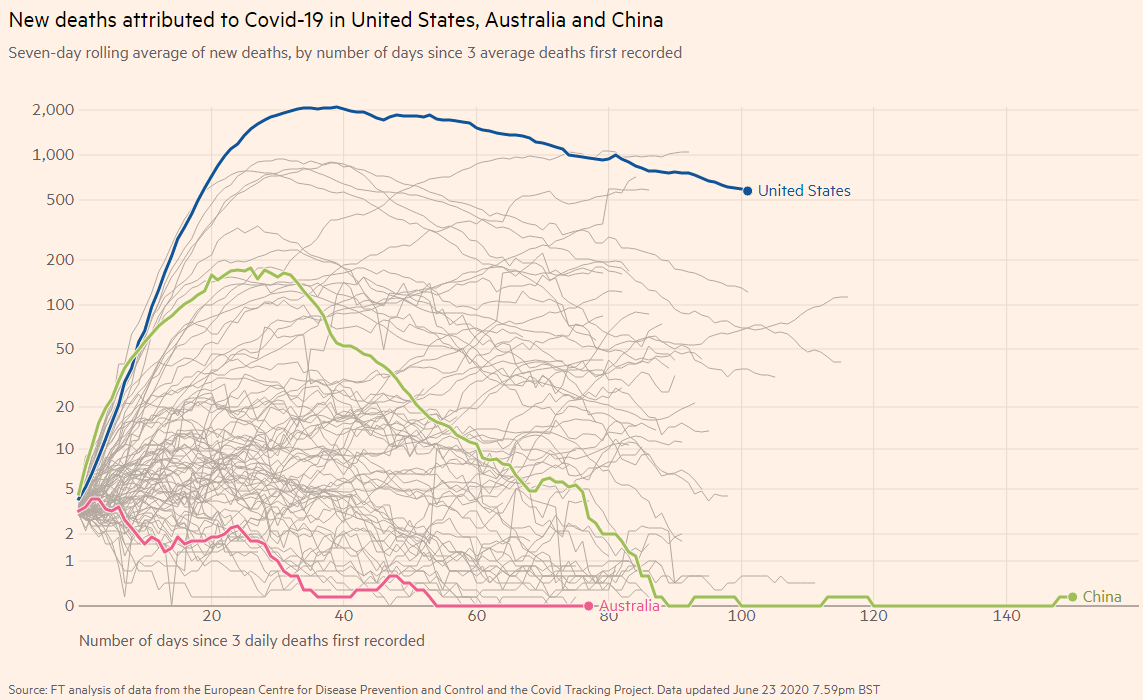 The pandemic – particularly its genesis and early spread – has played some part in stoking (more or less) latent geopolitical tensions between the U.S. and China. These tensions have revealed themselves in ways as diverse as trade, the cyber-realm, in relation to South China Sea and Taiwan, and most recently in Washington’s official response to China’s imposition of a national security law in its Hong Kong Special Administrative Region.

Coupled with this, we have seen unprecedented (that word again!) volatility in the oil market, including negative (!) prices; one trading day closed with the oil price at -$37.63. While what this means for economic activity is not clear, it does add to the strong sense that we are in uncharted territory.

The pandemic, and the geopolitical tensions it has revealed and intensified, have had real economic impacts. We have seen a demand shock (e.g. U.S. consumer spending dropped by 13.6% in April), a supply shock (businesses not producing things), and massive instantaneous unemployment (e.g. 40m jobless claims in the U.S.), simultaneously. Predictably, this has fed into official economic statistics. Economic growth numbers for the March quarter have been (unsurprisingly) poor with significant quarterly declines in GDP: U.S. -5.0%, China -9.8%, Germany -2.2%, UK -2.0%, France and Italy both -5.3%. Australia’s March GDP result isn’t released until 3 June, and is expected to be the first negative quarter since 2011, and we are likely in the middle of Australia’s first recession since 1991.

The shape of the recovery is the real question; the hoped-for “V-shaped” recovery has now given way to a “U,” or potentially a “W” (especially if we experience a second wave).

So how have investment returns fared in light of current events? Answer: surprisingly well (see table). In fact, investment markets – stock markets in particular – have been so strong that it is becoming hard to reconcile the two stories. For example, the S&P/ASX 300 fell by around 40% between February and late March, and has since rebounded by around 30% (to 1 June).

What economic news has caused such positive sentiment? We’re not sure. Investors appear comfortable to pay a progressively higher price for what looks like lower expected earnings (i.e. P/E ratios are now looking expensive again).

Whatever the explanation, the outlook for returns appears dismal. Cash rates are at all-time lows due to a decade or more of loose monetary policy. Bond yields are similarly low. Credit spreads have widened since March, but the return-for-risk trade-off is unclear until the real economic impact of the pandemic flows through to reported company earnings.

Private asset returns (e.g. private equity) are sufficiently idiosyncratic and skill-based to make it (very) difficult to generalise about their future performance. Some private asset returns will be good, some not so much.
Therefore, it is our view that risk-aware diversification is the best way forward. Moreover, we recommend against taking concentrated bets because the potential costs of being wrong would appear to be higher than normal.

And, finally, as usual, we recommend against getting caught up in short-term price volatility. Your time is better spent making sure you have the right financial plan to achieve your investment goals over the long term.

Some key current themes are as follows:

Inexplicably strong equity returns – It seems that, since our last monthly Investment Update (reproduced above), the market now appears to be pricing in a “V-shaped” recovery, and discounting (or ignoring) the potential for a second wave of the pandemic. This is despite there being significant dry powder on the sidelines (including MFIC dry powder!) (see Chart). A key concern is that the investor interest that drove the run-up in equity markets has been retail in nature, i.e. relatively inexperienced investors prone to capitulation in the next correction. 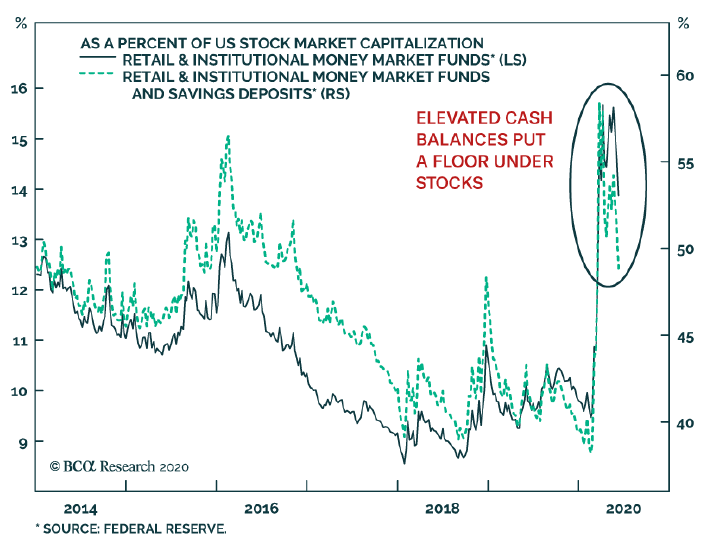 Strong recovery in credit – Credit investors who built an exposure to this asset class to avoid the volatility of equity experienced a rougher ride than they had (probably) bargained for on the back of concerns about the longevity (and therefore creditworthiness) of businesses impacted by the pandemic, and overall liquidity conditions. Credit has rallied strongly since the lows, as liquidity concerns have evaporated (see chart). 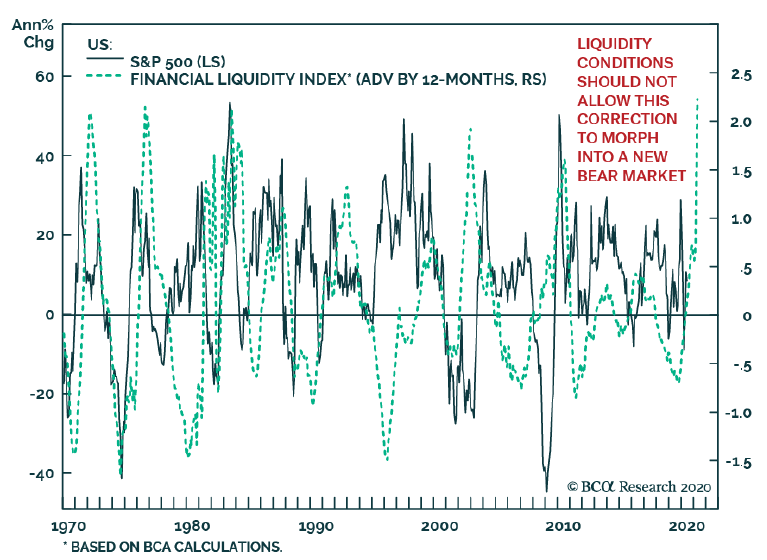 Bond returns remain strong – At yields this low, it is hard to be overly optimistic about future returns from bonds. That being said, there are a number of factors (e.g. the unknown future path of the pandemic, geopolitical concerns) that would appear to make the relative safety of bonds more attractive than some alternative investment propositions. Over the long term, bonds have represented a strong risk-adjusted investment (see chart; using US data). Whether this trend continues into the future – and, if so, for how long – remains to be seen. 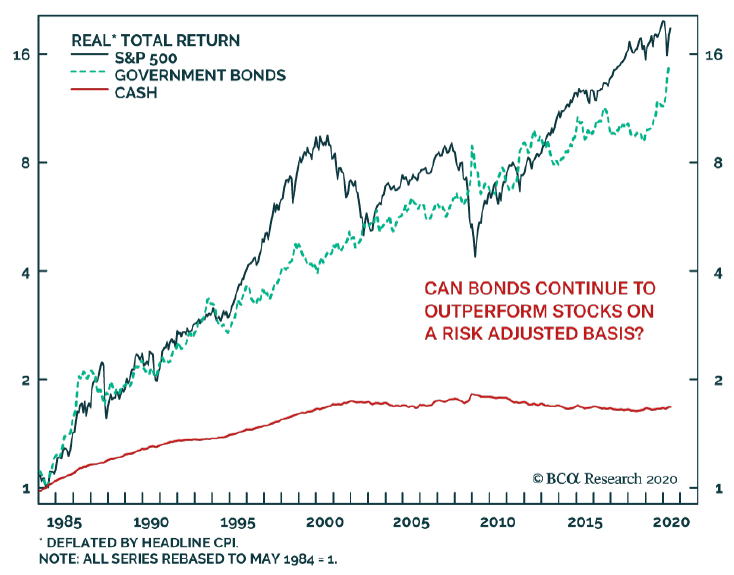 MFIC is – and will continue to be so in the future – a significant investor in unlisted assets, and especially in the property, private equity, and infrastructure asset classes. Each of these asset classes is highly idiosyncratic – i.e. the portfolios of, say, two private equity investors may be very different to each other making the idea of a “market return” problematic – so we share our intelligence about recent returns across these asset classes to give MFIC a sense about what other investors are experiencing:

The following diagram is taken from the MGD Quarterly Investment Strategy, May 2020 Edition.